It's a question that plagues Commanders of modern Armies. Unarmoured meaning light and fast but vulnerable to enemy fire, or armoured meaning heavy and slow but able to withstand certain blows.


The same question seems to have wormed it's way into the meta of 6th Edition Warhammer 40k, so here I am to analyse the question and some of the answers in a general 'applicable for most 40k Armys' way.

So what do we mean by 'Armoured'
We're not talking about the personal armour worn by your troops as that has little bearing on the distance with which you can move (generally) in 40k. What we're looking at is Transport for your Infantry, specifically we're interested in the:

But why wouldn't you take your metal boxes??!!
Running your troops up the board is slow, they become vulnerable to mid-tier multishot weapons (Heavy Bolters, Scatter Lasers etc.), and if you're forced to reduce your spacings - template weapons become a real headache.

I'm probably not selling the whole foot list thing to you very well, don't get me wrong if you want to get up in someones face in short order then look at Transports as a viable option. But don't discount foot-lists, here's a few tips on making foot work for you.

You want around a 1/3rd of your overall force being a strong base of fire utilising 48"+ weapons to give overhead fire to your advancing troops from turn 1, this helps knock out threats and messes with your opponenets target prioritisation - and don't forget some sort of unit to run disruption (deep strikers, flankers, turbo-boosters etc.) that can mess with the enemies rear-lines. Because you didn't take any sort of dedicated transport, depending on your army you've bought yourself atleast another 2 Infantry models per squad so there's more of you than normal.

When you're marching up the field you aren't aiming for your opponents deployment zone, you want those mid-field objectives or the enemy within optimum range for your infantry to bring their massed fire to it's full effect. If the enemy get's to midfield first using Transports or tries to counter your advance, they'll be met by squads advancing together with mutually supporting fire (remember we can move 6" and still fire rapid fire weapons to their full range now) that aren't hamstrung by how many fire ports a vehicle has, and are covered by an eye watering amount of cover fire.

Once you're where you want to be it's all about being difficult to move, this is where either good armour/cover saves come in, or just lots of warm bodies to soak up the fire (hordes). We've got a few things that makes our lives easier at this stage - go to ground if you absolutely must, cover and area terrain, or if you aren't in a posistion to return effective fire onto your opponent with a squad then we have Line of Sight blocking terrain - remember with objectives all that you want is these little critters to stay alive until end-game and to beat off any counter-attack with them. Even in missions where fast attacks or heavy options count as scoring, your Infantry hold the ground allowing your FA/Heavy options to grab them in the last turns uncontested. 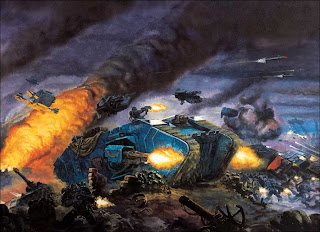 In Summary
Hopefully the points above give some food for thought, overall, for me 6th Edition is all about mid-field. Forget tabling your opponent or digging them out of their deployment zone. Whilst I've always been a die hard Mech Fan, I'm really leaning more and more towards foot-heavy lists. The core components for victory in most games is a good base of fire and a strong midfield presence - have a look at your frequent lists and see if  you could tune or otherwise optimise your units to get the most out of the 24" battlespace.

What do you think? Is getting from A-B in the shortest time possible your key to dominating the ground? Or is slow and steady firing as you go more your style? Let me know!