So Space Wolves don’t suck in 6th Edition but we seemed to have been knocked down the pecking order somewhat due to newer codex’s being released with 6th and the overall Meta changing in 6th (I’m looking at you, fliers, Anti-Aircraft and big ass Walkers).

So let’s look at what’s hurt us most before we look at how we can overcome these obstacles and show the gaming world we have some bite left in us yet.

Maneuverability – We generally lived on the principles of big Grey Hunter packs steaming across the board in Rhinos being our basic building block to list building. Now in the age of Transports being glanced to death this is considerably less reliable than it used to be, with shooting better than ever in this edition you risk being stranded out in the open mid-board and just being blown away by Tau and Guard gun line armies.

Assault – This affects us two fold, arguably Grey Hunters should sit shooting until assaulted then use our Counter-Attack USR - however they perform just as amazingly if you need to launch the assault yourselves with our various bolt-ons and upgrades. Now we’ve got random charge distance and overwatch to contend with all of a sudden Assault looks less sexy, this means we want to do it less and the enemy wanting to do it less to us (out of my last 2 big 2k games there was one assault…).

Acute Senses – With the increased likelihood of Night Fighting in this addition, it would be awesome if this allowed us to sniff out our foes and drop them dead, ignoring night fighting. Unfortunately what it means that army-wide we can reroll outflank results… Cheers life!

The Skies! - As alluded to earlier, we have no Anti-Air options and no Air Support in our codex 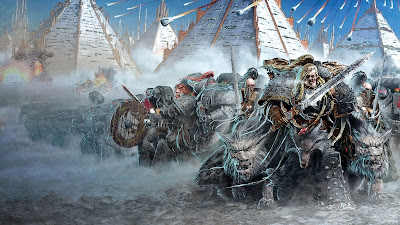 To survive, we must adapt!

It’s not all doom and gloom for the sons of Fenris, we just need to look at what stayed good or went from shit to awesome which is no bad thing, options that existed in the Codex that you normally wouldn’t touch with a barge pole all of a sudden become viable.

Guns, lots of them – Let’s match fire with firepower! Leave the Meltas under your bed and embrace Plasma, in 5th I had a 3:1 ration of Melta to Plas, now I’ve flipped them around so my army is far more Plasma heavy – with the changes to Rapid Fire meaning we get that shot off at 24” after moving our normal 6” that gives us a lovely 30” Str 7 threat range, design your List so you can be the king of the 24” battle, the master of mid-field play. Stack this with your obligatory 2-3 Missile Launcher Long Fang packs and you’ll have a base of fire that’ll make a Tau blush. I’ve also experimented with Long Fang Heavy Bolter packs and Wolf Scout Snipers which have proved hugely effective at taking out these foot lists we keep seeing nowadays.

Wolf Priests – Stop laughing, I’m serious! With the changes to ‘Preferred Enemy’ in 6th now affecting shooting aswell as Assault all of a sudden these guys are a re-roll hit/wound powerhouse for the unit they’re attached to. Don’t equip them for expensive close combat ass-kickery, these guys are to buff the Grey Hunters/Fangs/Termis that they’re with and nothing more so keep them cheap. Sprinkle some Saga of the Hunter (finally, something for acute senses!) to add some outflanking goodness to the unit he’s with and improve the maneuverability of your army.

Runic Weapons – These have stayed the same, yes. But, with Psy abilities getting more complicated and powerful in 6th, let’s not discount that 24” 4+ shut your shit down bubble your Rune Priest(s) have. Very few armies boast this level of annoyance so use it! (Njal also gets the same but on a 3+!!) 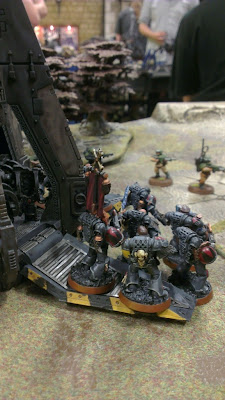 Drop Pods – Yes you heard me, Drop Pods. Take 3 and leave the Rhinos back at the Fang! 2 will come down on your Turn 1 (remember you round up with the Drop Pod Assault rule) allowing you to dominate key areas of terrain with your Grey Hunters or exploit a weakness on the enemies side of the board and 1 will come on as normal with reserves allowing whoever is in there (maybe your death star?) to drop in once the eb and flow of the battle has been established so it’s used to its best effect. We don’t have Deep Striking terminators so having them in that 3rd pod gives you a nice reliable delivery system and you don’t have to put them down on the first turn.

A word on Allies – Okay, so the easy option is just to take some Guard for some boom boom or some Codex Chapter for some Flyers, but where’s the fun in that?! We’ll soon have a 6th Codex that’ll probably have Wolf-Fighter Squadrons flown by Wolf-Pilots with their Wolf-Topgun special abilities (seriously, I hate how our Codex has us sleeping with Wolves). Let’s keep our Army pure and figure out how to get the Sons of Fenris back on top of the dog pile!

In Summary
Maneuverability and having your units close enough to provide mutual support to one another, I believe this is the key to unlocking the Wolves potential in 6th. Getting them where you want them in the shortest time possible. Saga of the Hunter and Drop Pods gives us this opportunity and it’s something we may have overlooked in 5th edition, so experiment, think outside the box and leave no option off the table – the game has changed and we need to change with it!