Home » Editorial » imm0rtal-reaper » Kickstarter » Opinions » rc » Would You Back a Games Workshop Kickstarter?

Would You Back a Games Workshop Kickstarter? 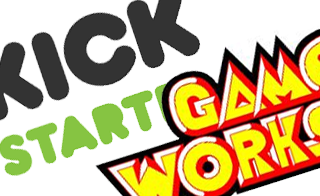 Hey guys, imm0rtal reaper here with my inaugural post, a little hypothetical discussion for today. I'll be doing an article just on Kickstarters in general very soon, but I wanted to bring this up first.

For years now, we've all wanted a plastic Warhound titan on the market and there have been people claiming time and again that it’s not possible for 2 reasons:

I want to start by addressing point 1, the technical side of it. Over the past 12 months we've seen model kits getting bigger and bigger. Perhaps the kit with the biggest (no pun intended) impact was Dreamforge’s Leviathan. This kit retails for £95 and it is a monster of a kit, but as you can see, it is a fair bit smaller than the Warhound itself.

However, I have no doubts that technically, the Warhound is achievable in plastic. I think the area that would cause the most problems is back plate, because there is such a distance from the lowest point, to the highest point. But that could be split in two.

Or failing that, the Lucius pattern is much more boxy and would lend itself more to plastic production if they couldn't do the Mars pattern, which I'm certain they could (especially after seeing the sprues for the new Necron kit)

So that leave’s option 2, it’s not financially possible. And that’s what the meat of this article will address:

Let's say that the tooling costs for the Warhound were £100,000 and its retail price was £115. That £15 would probably be enough to cover the costs of production (the actual plastic that makes the kit) and the cost of packaging etc. Leaving what is essentially £100 for "profit".

Now, initially, that "profit" needs to pay back the cost of design before it can really be considered profit. So, if the kit cost £100,000 to make, Games Workshop would need to sell 1000 warhound titans before they've paid for the tooling costs.

I'm not certain on the number, but let’s say there are 300 Games Workshop stores (not including independent retailers) worldwide. So each of those stores only needs to sell 4 warhound titans before the mold has paid for itself and started making profit. That doesn't take into account GW online sales, or independent retailers.

I am certain, absolutely certain, that a Warhound titan kit would pay for its tooling cost and start making profit on the day of release. Even if only 2 or 3 gamers per store worldwide bought it on release (which I think is a very, very low number) it would make its money back and start making profit right away.
Even if the tooling cost was £200,000, which is a huge number, I'm certain it would make it back on release.

But, that’s a massive investment for GW to make, and the only reason I can see for them not doing it is that they don't have the money to give the tooling costs. Well, if ever there was a product that GW could take to kickstarter, it's a plastic Warhound titan.

Make no mistake, people would be up in arms, furious that the industry leader is using kickstarter. They’d say they have no right to use a platform designed for small time companies to get funding for their projects. But despite all the fuss, people would still back it.

If GW said "look, we know you want a plastic Warhound, and we do too. But unfortunately the tooling costs are so much it means we would have to produce nothing else for X months, so we can't justify it. But with kickstarter we can secure the funding we need straight away, continue to give you the volume of kits you've come to expect, and in 12 months time, you'll all have a Warhound titan sat beneath your Christmas tree." I think people would flock to the Kickstarter like flies.

The kickstarter would only need to be a simple thing with a pledge level for 1, 2 and then increasing numbers of titans. The stretch goals could be to add other weapon options (either included into the original kit [in which case they probably will have made the retail price a bit higher before launching the campaign] or as add on kits available from GW direct)

They could have a large stretch goal for a chaos version (which is essentially a variant panel set. So they could sell the chaos one for £20 more, or sell the panel set on its own on the site) and chaos weapon sets.

So folks, what are your thoughts on the possibility of a plastic Warhound. And would you back it if GW ran a kickstarter campaign to fund it? If you wouldn't, what product would you pledge towards if GW did run a campaign for it.