REVIEW: A New Guys Review of Warhammer World by Bayonet‏

So the other day I and my circle of gaming friends took a trip to Warhammer World for the very first time.

My excuse is I'm no veteran of the Hobby and I've put it off probably due to not knowing what to expect, would I look like a tool for not knowing as much as the other attendees? Would I be jumped on straight away to buy a thousand and one products? Hell do I even need to pay to get in?

So a little research, a post code for my SatNav and a road trip later we arrive in Nottingham to the self proclaimed 'Mecca' of our hobby.

Travel to Warhammer World was fairly easy taking the exit for Nottingham off of the M1, a steady drive through a fairly extensive residential side of the City dodging more speed cameras that I've ever seen per square mile and we arrived at an unsuspecting Industrial complex - seeing the Aquila and a Rhino parked out front reassured me we'd got to the right place and weren't about to stumble into some FedEx distribution centre with army cases in hand. 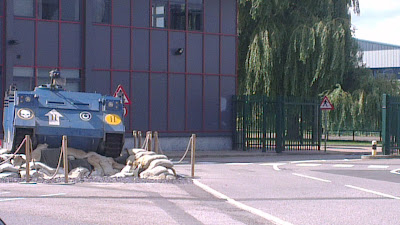 We'd got there just before opening time and the car park quickly filled with cars and coaches as it turned out we had decided to go on the same day as the Allied Invasion event Games Workshop were holding! At the entrance we were treat to a fantastic display in the window of the Horus Heresy World Eaters going at it doing what they do best... taking chain axes to flesh and generally making a mess of things. Going into the main entrance I was pleased to see we didn't have to pay to get in although we were met by this guy: 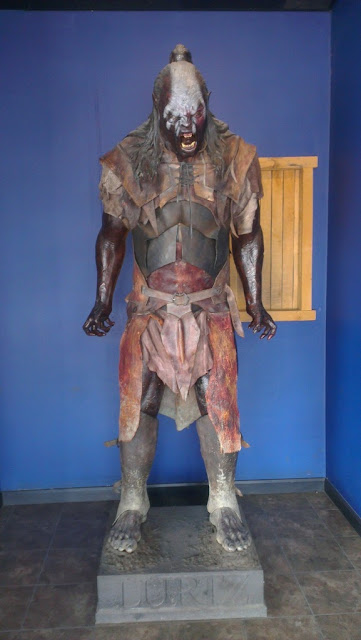 Dave, our chief planner for the day had the foresight to book the four of us 3 tables for 2 1v1 warm ups and a higher point 2 v 2 on one of the featured boards for some quality gaming. We were pleased to see that the ones we booked had his name on them and no one had stolen them! So we got stuck into our two 1v1's but the thing that struck me was the atmosphere around me at all times, we were surrounded by people celebrating the hobby - from the occasional scream of "WAAAAAGH" or "For the Emperor!", to the shouts of surprise of fortunate or unfortunate rolls of the dice. Everyone we met were friendly and happy to show off their armies or their games and were equally as keen to see ours. 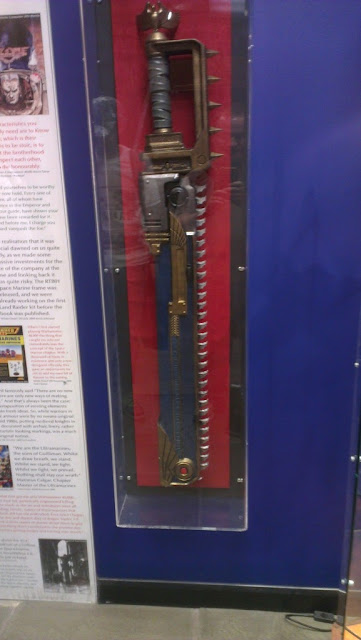 After the first game was up (my Wolves lost horribly) we headed to Bugmans bar. Now as everything so far was free this was where I expected to get bent over (financially speaking). I was however pleasantly surprised at reasonable pub-lunch style prices, and if the prices shocked me then the high quality blew me away - nothing at all what I was expecting from a company that makes tabletop wargames. I had a kingsize cheese burger and boy was it huge and the burgers themselves were thick excellent cuts of meat - in the end I couldn't finish everything that was on my plate, I was absolutely stuffed! 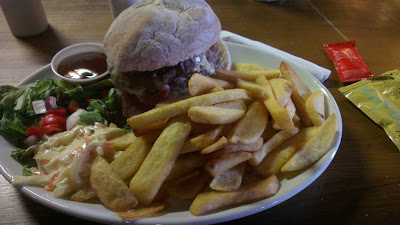 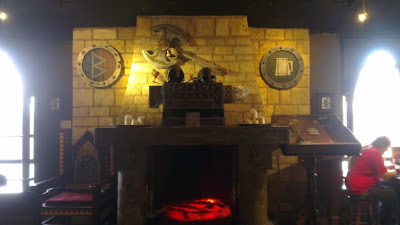 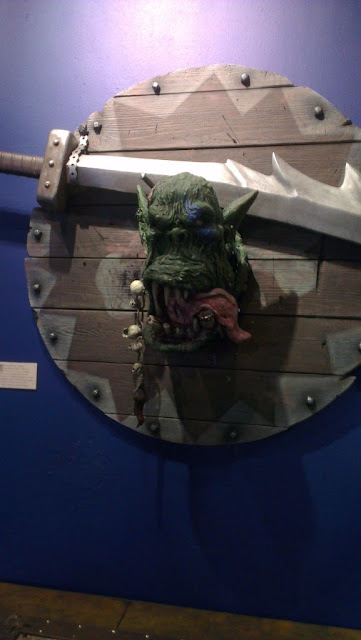 Before our big game we visited the Shop and the miniatures hall. The shop was conveniently situated at the top end of the Gaming Hall, the decor inside matches the Gaming Halls castle-theme wonderfully and you're treat to everything a normal hobby centre has. Classes for new joiners, painting stations, gaming tables ready to show you the ropes with the Dark Vengeance box set all complimented by very full shelves and the ability to buy Forge World models direct.

We then headed upstairs to what I was looking forward to the most, the Miniatures hold - hoping to be inspired in my own work and to see the big Space Wolves diorama they have on display I wasn't disappointed. Now at times in the past I've seen things in Codexes and White Dwarf and thought "yeah I could do a better job of that" to certain models - what I can tell you is the photos don't do these models justice, in person the attention to detail and quality is just mind blowing. Rather than try and explain it to you I'll just show you my photos below, but I left suitably inspired and with my mind blown by the Wolves diorama. 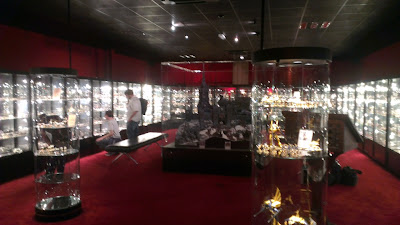 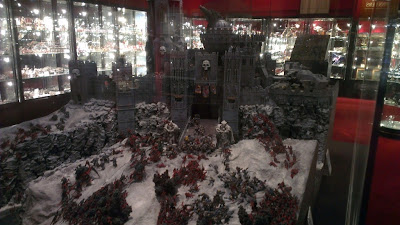 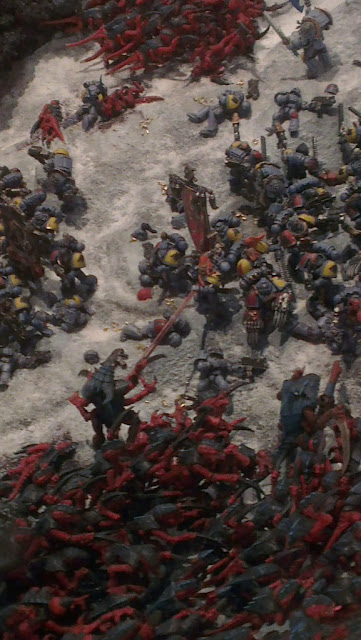 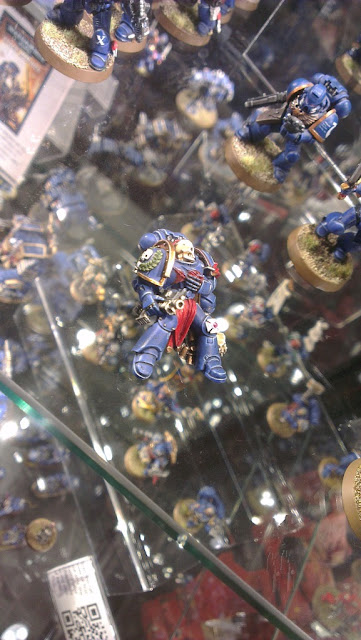 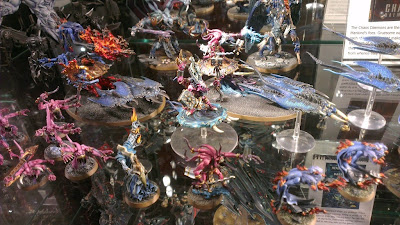 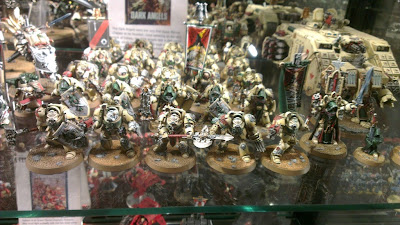 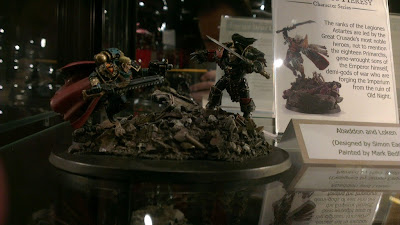 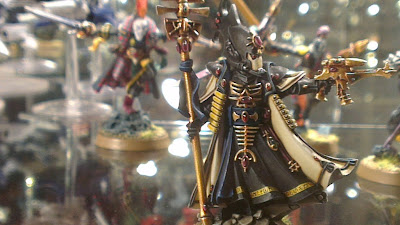 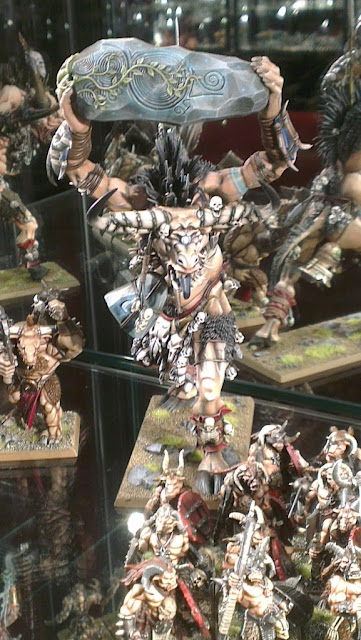 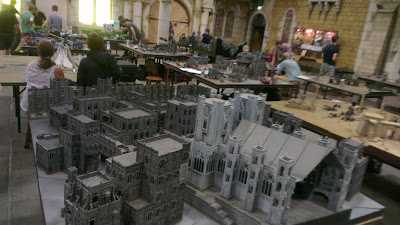 Now I'll be posting up a full battle report in the next few days so I won't go into too much about this one but suffice to say it was an EPIC game on some amazing terrain. The only obstacle was my small stature and being able to reach the middle of the table with my t-rex arms (luckily I had two lanky opponents that could reach!). This took up our last 4 hours or so but we were treat to the same great atmosphere as we experienced in our morning game. However bad the game went for me it did give me the opportunity to get a great shot of angry Space Wolves bearing down on the forces of the Inquisition! 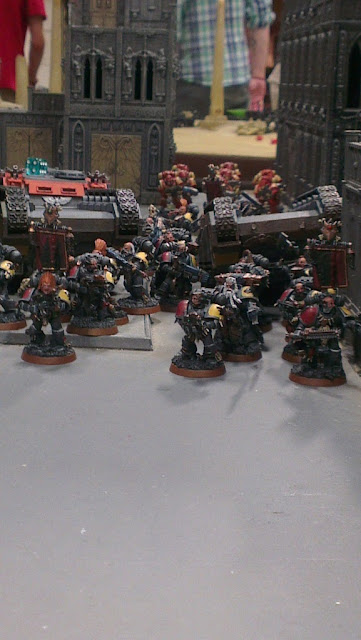 In summary then; Warhammer World was a fantastic and inexpensive day out to really celebrate every aspect of the Hobby. Easy to travel to, you can book some of the most amazing tables you'll ever play on, and the atmosphere and people are great. Take a painted army and a camera to really get the most out of this place and keep an eye on the website for events that pique your interest. I and those that I play with plan on making regular trips to use the facilities there from now on due to our fantastic experience - if you're on the fence about it I'd say try it! I think every fan of the hobby needs to go once, even if it's just to see the Gallery and watch some games on some truly amazing terrain.