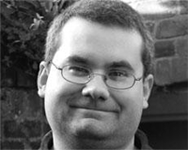 My name is Josh Reynolds and I’m a professional freelance writer. In addition to my own work--a full list of which can be found here--I have written for several tie-in franchises, including Gold Eagle's Executioner line and Black Library's Warhammer Fantasy line. I have also written numerous non-fiction articles and reviews.

THE VOCIFEROUS KAI
By
Josh Reynolds

The sun was setting over the Square of Brass Stones in the city of Posqu and bells jangled discordantly as street preachers and self-proclaimed high priests shouted for the souls of the faithful. Braying sages, clad in hair-shirts and bearing placards, accosted penitents, and seers sold ten-a-penny prophecies to the desperate. Wooden gods were carried on sticks through the cramped square by howling phlegmatics and the crystal-masked servants of the Passion Mothers watched the crowd from the sidelines, making note of which temples the palanquins of the city’s aristocracy moved towards. The unwashed masses flowed in and out of the lesser temples beneath the unseeing gazes of idols and eidolons, seeking either solace or satisfaction.