VASSAL 40k and The Likelihood of an Online Tabletop 40k Replica

Hi Lee here with a talk about Vassal 40k, online 40k and any other tangents I manage to stumble on.

Love it or loathe it Vassal 40k exists and if recent talk on the internet is anything to go by it seems to be making somewhat of a resurgence. If you're looking dumbfounded at the screen right now wondering what Vassal is allow me to fill in the blanks.

Vassal is a game engine for building and playing online adaptations of board and card games.

In 40k terms it's the closest you can get to the real thing online. Forget Dawn of War, forget the upcoming Armageddon game from Slitherine Studios it simply doesn't come any nearer to tabletop 40k than Vassal. Sounds rosy so far right? 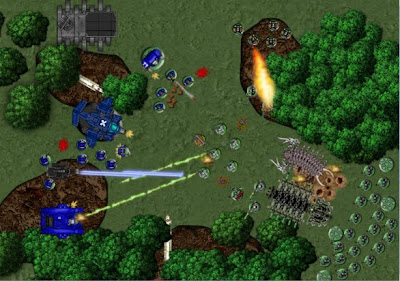 In September 2008 Games Workshop sent a cease and desist letter to Mr Tim Davis - the head of Vassal 40k at that time. Fast forward five years and it seems nothing has changed, the module is still active, it's still being developed and updated (by a different team I might add). Only yesterday a guy on the TWG chatroom informed me - unconfirmed of course - that a certain Goatboy of BoLS fame has been seen playing over the program - queue the stampede of wannabes scrambling for a chance to play and defeat the venerable Goatboy!


If you're interested in seeing this thing in action head over to http://vassal40k.wordpress.com/

So a module that was outlawed by Games Workshop legal is now being played regularly (I've seen 20-30 concurrent players in recent weeks). Was this C&D letter from Games Workshop a limp bluff? In that case props to the team for blatantly disregarding it.

Vassal 40k have balls. Big manly adamantium balls. They'd have to to stick their middle finger up to GW legal...


I on the other hand do not own a shiny pair of adamantium balls, when this beauty dropped through my letter box I had to clench my buttcheeks to stop from shitting myself. 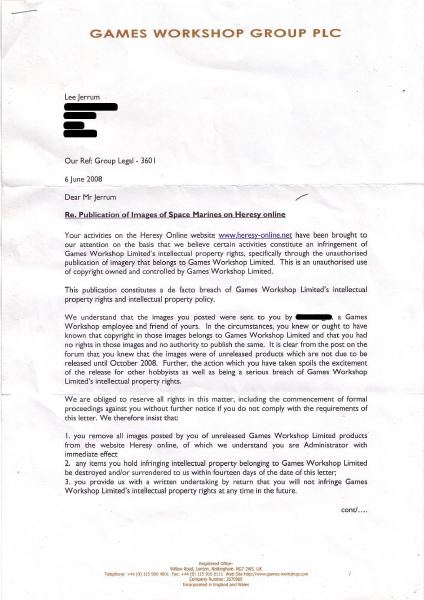 Perhaps GW legal about turned about decided to let it slide? I mean, how bad can this program be? Does it really jeopardize the future of our hobby as many have claimed?

Shortly after my discovery of Vassal all those years ago I dreamed a dream. In this dream out of breath and sweating profusely I rolled off Megan Fox's quivering body and... Wait - wrong fucking dream... In the proper dream GW suddenly woke up and based on the success of Vassal licensed their own online replica. This of course hasn't happened and likely never will.

Wizards of the Coast did it and released a carbon copy of Magic the Gathering. Magic Online was released in 2002 with a shit name and still to this day has a shit name. It's also still going strong. They charge obscene amounts of money for digital card packs, trust me with this I've spent a few shillings on them.
As far as I know, MTGO hasn't negatively affected their offline sales. Could GW one day adopt this same strategy? The technology is certainly there to make a true replica.

Think of the possibilities were GW to release this Online Replica, it could lead to a proper player table with Elo rankings and dare I say it - a prize fund for exceptional players that win sanctioned Tournaments. I'm getting aroused.  I'm sure my thoughts on this are in the minority, I've heard plenty of counter arguments claiming Online 40k and Vassal 40k destroys the offline miniature hobby. I don't necessarily agree but I can see the reasoning behind that perspective. However, speaking personally with reference to my own experiences playing Vassal all those years ago it actually enhanced my offline game, it allowed me to test run units and even buy things I hadn't considered before.

Lets pretend the powers that be authorized an online 40k variant. How would they handle the distribution?

I've had a think about this and found two methods, both with their own pros and cons. The first would imitate the system used by Wizards of the Coast. Each listed unit would be purchased separately and unlocked with the monetary costs matching those of physical purchases. The glaringly obvious pro of this particular option is the profit - it would be monumental. Common sense dictates that a digital product yields far more than a physical product. The biggest pro of this though is also its greatest flaw. The wargamer demographic (generally speaking before you beat me to a pulp with your bulging wallets) is young with limited disposable income, spending on digital products could limit spending on physical products - having a detrimental effect on the proper hobby. Specialist games for example was canned for this very reason (I've been informed by someone "in the know", very in the know...) he said Specialist Games reduced the money people spent on the primary systems - ie Warhammer 40,000 and Warhammer Fantasy.

For this reason I'd advocate the second option - subscriptions. In a similar vein to that used by Blizzard and other MMORPG developers. The players purchase the initial game as a whole and then pay a monthly subscription. Purchasing the game would unlook a single army of your choice and all units contained within, remaining armies would then be unlocked by buying future DLC packs as and when you choose. This would allow players to buy the online game and in time every army whilst letting them buy other stuff and continue to feed their plastic crack addiction.

Sadly, I fear we will never see a true representation of the game online. Why? I'd love to hear your thoughts on why it'll never happen or indeed how GW could facilitate its creation.