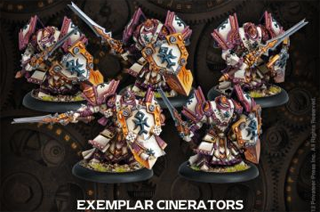 The Exemplar Cinerators of Menoth are often dismissed and ignored when building lists with Menoth.   This is because there are many unit options that perform better for the same points value.   The main issue with this is that while not many people voluntary go out and purchase a unit of Cinnerators there is still many that own them.   This is because the two player starter box for Warmachine includes them.  Bearing this fact in mind I will go over my thoughts on the unit and how I play them.

First off the unit does have some issues that should be mentioned.   They are slow, speed 4 slow, which can be frusterating in a army that is full of slow moving models.  They also lack reach on thier weapons which compounds the slow issue.   The lack of reach, combined with lack of speed and only one attack each is the main reason the Cinnerators take the ammount of flack for being lackluster.  They are also only defense 11 which means pretty much anything with average roll of 7 on 2d6 and a MAT/RAT of 4 or better will be hitting them.


So that is a lot of meh piled up into a unit that costs as much as a decent heavy jack, what could possibly counteract this pile of issues?   The fact that many of these issues also have strong aspects tied to them.  The slow speed of the unit is offset by that fact that if they take damage they gain a +2 to their SPD for the next round.   While this seems counter productive there is things that make it a nice boost.  The models each have 8 wounds, so they can take some hits and still be standing.   The other aspect of this and what counteracts their low defense is the fact that they have armor 17.   This means those pow 10 weapons will have to get at least a 8 on 2d6 to do damage to a model.  This high armor is not something to sneer at or dismiss. 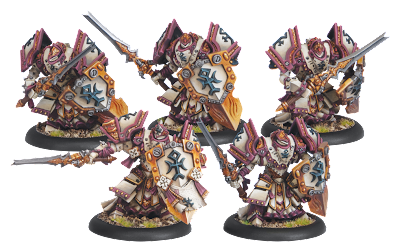 They are also, like most other Exemplar units in the Menoth army, Weapon Masters with Magical Weapons.   So while they lack reach they do have a very solid punch when they deliver.  They have a P+S 12 weapon which has an average hit of 22 or 24 on a charge.  This combined with the fairly decent MAT of 7 means they also hit ARM 14 with the average 2d6 roll of 7 mentioned earlier in this post.   Thier swords also have the Flame Burst rule on them.  This rule means that when they box a enemy model all enemy models within 1" of the boxed model suffer the fire continuous effect.    While this is easily countered with spacing by your opponent there is times where you can get in combat with a bunched group of models.   The last plus of the unit is that it is Fearless.  It is also worth mentioning that they are on medium bases, which is both a boon and a hindrance.  They can provide cover for those small base models in your army, they are immune to Trample but at the same time this means they have a harder time gaining cover.

So as a recap of the pros and cons of the unit:


My recommendation is to play them with a Warcaster that can give them Defenders Ward.  This means, pKreoss, pSeveruis, and Vindictus.   There is other buffs that can be useful on the unit but I feel that Defenders Ward makes them stand out more than the other options.   This turns them into a unit of DEF 13/ ARM 19 models with 8 wounds each.   I tend to run them up a flank with a solo or two while running DW on them.  They can soak up a lot of damage and barely be scratched while DW is on them.  It means that to hit them you will need a MAT/RAT 6 with that average 2d6 roll of 7.   While this is not overly hard to achieve it is the ARM 19 that really makes opponents frown.  ARM 19 means that average 2d6 roll of 7 would need at least a 13 POW/P+S to do 1 damage to a model.   This is by no means a hard thing to field for most armies but it does mean they will have to consider investing some of their harder hitting models to deal with the unit if it gets near.  I also like to use them as a clean up unit against other infantry units.   Send something slightly faster ahead and let it get engaged with a infantry unit.   They will pile around each other and end up in a bunch.   You can then send the Cinnerators in for flame burst fun and games.

If you are looking to buy a unit, I do not recommend the Cinnerators.   If you happen to have them already or manage to get them for free then I suggest trying them out.  They can be a fairly solid and meaty addition to your army, especially when starting out.