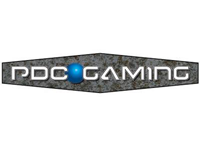 Some of you may know of a small kickstarter campaign that was run earlier in the year by PDC Gaming, a new company. The goal of the kickstarter was to produce a set of plastic accessory sprues for your favourite sci-fi games.


What was really interesting about the campaign was their goal. For £10,000 they intended to produce 3 injection molded hard plastic sprues.

In our hobby, there’s always a lot of discussion about the cost of hard plastic tooling. And while most of us have no idea, the numbers quoted are always in the tens of thousands. But here’s a company that’s able to tool a plastic sprue for as little as £3,333. That is exciting!

Just take a look at some pictures of the bases they made. These aren't 3D prints, or masters, but production casts, exactly as you’d get if you bought them from a store.

As you can see, the detail is crisp and clean and the smaller details seem to have been captured beautifully.

“But reaper,” I hear you say, “why are you so excited over bases?”

Well in fact, I’m not. What excites me is the possibilities this opens up. To have a company in the UK able to produce quality hard plastic molds at such a (relatively) low price could (potentially) change the landscape of the hobby, in the UK at least.

At the moment the main plastic manufacturer (outside of GW) in the UK is Renedra. Renedra produce fantastic quality kits, but over the last few years their waiting list seems to have grown and grown. Renedra tooling is also quite expensive.

If PDC are able to maintain a consistent quality in their products, think of what could happen when other miniature companies start using them for their plastic tooling. We could see so many smaller companies move to plastic, something which they may have been unable to do in the past.

Of course, this is a hypothetical situation, but not one outside the realm of possibility. And I for one am very excited by the prospect and will be watching PDC very closely over the coming months.