Home » 1 » Getting Started » imm0rtal-reaper » Kings Of War » Mantic Games » GET STARTED: Kings of War - The Basics

GET STARTED: Kings of War - The Basics 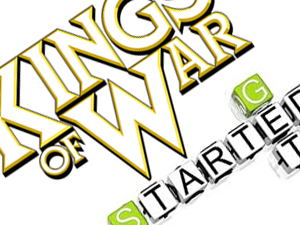 Getting Started With Kings of War: The Basics


Welcome wargamers to my new Getting Started series where we will look at how to get started with different game systems; the rules, the factions, tactics, the miniatures, and everything else that goes along with the game.

To kick us off, we’ll be looking at Kings of War by Mantic Games. I'm sure many of you are already familiar with mantic and have heard of Kings of War. But for those of you who haven’t, Kings of War (hereafter referred to as KoW) is a 28mm scale fantasy mass battle system where players control units of various warriors.

You can download the rules and all the army lists free here. And I thoroughly recommend you do so so that you can follow along as we learn the basics of the game.

The first thing you’ll probably think about KoW is that it’s like Warhammer Fantasy. And in a manner, you’d be correct. Both systems are fantasy and both use regiments of troops formed into blocks. But aside from that, they are about as different as two systems like that can be.

Let’s begin by looking at the main difference between KoW and Warhammer; Nerve!

You’ve Got Some Nerve!


In Warhammer, when a unit suffers a casualty, you remove a model and the effectiveness of the unit is reduced. In KoW, you do not remove models, your unit is either alive or dead. Taking damage does not reduce a unit’s combat capabilities, or reduce the amount of attacks they have.

This is because of the Nerve mechanic. Each unit in the game has a nerve assigned to it. This statistic represents many things, it represents soldiers dying, soldiers being injured and soldiers fleeing. It is a two part number represented as the following 11/13. 11/13 is the Nerve for a 10 man unit of regular human infantry.
How Nerve works is when a unit takes damage, that damage is recorded (on a piece of paper, or with tokens) and at the end of each turn, any unit that has suffered any damage rolls 2D6 and adds the amount of damage they have taken. If the result is higher than the first number, in this case 11, the unit is Wavering, which severely reduces its effectiveness. If the result is higher than the second number, 13 in this example, the unit is Routed and is removed from the board.

This is an interesting dynamic as it means you don’t have to spend time removing models from their movement tray. You just total up the damage and then when it’s time, remove the entire unit. This opens up a lot of hobby opportunities that we will discuss later in the series.

So now that we understand that units in KoW act as a single entity, and not multiples, we can look at the basics of game play.

What is a Unit?

In KoW a unit is a group of models that come either own their own, in 3s or as multiples of 5. Unlike Warhammer, you cannot choose freely the number of models in a unit, but rather you pick one of several options from the unit entry (usually 5, 10, 20 or 40 for infantry.)

Another difference between Warhammer and KoW is KoW’s more simplified stat line. An Elf scout unit for example may have the following stat line:

Let’s take a closer look at what all that means:


Nerve (Ne): The scores needed by the enemy to make the unit waver or rout.

So as you can see, things are already a little different to what you may be used to. KoW doesn’t used tables to compare the abilities of the units in combat to decide what is needed to hit, everything to you need to know is in the unit profile. If a unit’s Ra is 4+, you need a 4+ on a D6 to hit with a ranged weapon. Simples!

Next time we’ll look at the turn phases and how to move, shoot and fight in Kings of War.

I hope you enjoyed the first part of this new series, be sure to download the rules and give them a read, and I’ll be back tomorrow when we can dive into the meat of the game!

Until then, happy wargaming.