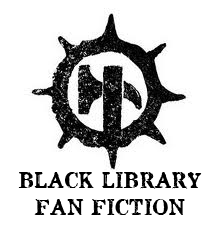 Today we're chuffed to publish our first ever Black Library fan fiction submission. Penned by Heresy-Online's "Matt" AKA Jace of Ultramar. It's the first of an ongoing series.

If you'd like to send in your own fiction please check out the submission guidelines here.


The cell was dank and the smells that wafted into it were on par with most death worlds after a battle and the corpses of the dead were left in the sun. Within the cell, a large form moved. A man who once had taken part in leading others of his kind into battle now sat in the dark confines, his armour stripped and nothing more than a tabbard to cover his shame.

"James Briggs." The voice called to him from the door he sat across from day in and day out for a time he could no-longer recall, "Stand and  ready yourself. Place both hands against the back wall and stand in place until instructed otherwise." Briggs stood and placed both of his hands to the wall, allowing it to hold him up. The door's lock mechanically 'clanked' before opening. A mix of heavy and light foot-steps robbed the room of its previous silence. A cold, armoured, hand gripped Briggs' shoulder and turned him around in place. He now stood face to face with a helmed figure, silver-grey in appearance, and with glowing blue eyes, a Grey Knight. "You will now sit and listen."
Briggs sat down in place on the bench in the cell, "You could always say 'please'. You may be a captor, but, that doesn't excuse poor manners."
The Knight back-handed him before locking his hand around Briggs' throat, "If you were meant to speak then you would have been instructed as such. Sit in silence and endure no further discipline." The knight released his throat and Briggs slumped against the wall, gasping. Rubbing his throat, he sat up again and looked downward.
"James Briggs. Space Marine. Former rank held as Captain of the reformed Crimson Fists, post the Rynn's World incursion by the Orks. At the battle of New Casten, three years ago, you lost half your company to an army of daemons trying to hold them off until the Grey Knights arrived to reinforce your position. During the course of this engagement you accomplished slaying the Daemonic Prince Ma'slar. Later, you were presumed dead when your position was overrun by hordes. That's quite an impressive write up." stated a tall man adorned in ceremonial robes that barely touched the floor. His greyed hair was short and around his neck hung a gold chain with the symbol of the Inquisition centered in the middle of it. "From what I can gather you were armed at that point with nothing more than a power fist. What was it like to physically punch a Daemon so hard that you actually killed it?"
Briggs took in the man's question and thought for a moment, "Invigorating, actually. Then again, when faced with dying at the hands of a Daemon, one would prefer to kill it first with most any means necessary."
The man smirked. "Captain Briggs, you do not know who I am, do you?"
"No. Presumably, the man who placed me here. Honestly, I'd prefer you cut to the chase so that we can move on."
"Very well. I am High Inquisitor Galen. I represent the High Lords of Terra on this occasion. Your time spent, here in this disgusting cell, has come to an end. The Lords have decided that enough time has passed since you were declared dead to assign you to a new task in service of the Emperor."
Briggs leaned back against the wall of the cell, "Why bother declaring me dead in the first place? Its not as if there was any genuine point to it."
Galen held up a finger, "Ah, but, there is. We have sought an opportunity to acquire a Captain from an established Space Marine Chapter for some time now. When your broken body was recovered from New Casten, we saw the opportunity. The Inquisition and the Crimson Fists have had a long standing tradition of co-operation. We were hoping that you would consider continuing to honour that tradition for the assignment you are about to be granted."
Briggs rubbed his throat again, the feeling of the Grey Knight's hand left a throbbing feeling where it had gripped him. Looking up at Galen, "I have no desire to rejoin the Death Watch if that's what this is about to equate to. I did my time there and I have no desire to return to it."
Galen grinned, "Not in the slightest." He then turned to the Knight, "Leave." The Grey Knight turned and left the two in the cell. "We are assigning you to a new Chapter. One in which you will serve the Inquisition, covertly, and appear to act independent. You will carry the title of Chapter Master and lead your new brother marines into what I'm sure will be nothing less than glorious combat against the enemies of the Emperor. You will have to start from what will be roughly the ground up. Thus far we have assembled and trained ninety battle brothers to place under your command. What say you?"
Briggs sat back in silence for a moment, "Let me get this straight. You're assigning me a Company's worth of marines and presumably the needed equipment to support them and I am to lead them against the designated enemies you give and appear to not work for the Inquisition at the same time?
"Indeed." said Galen as he clasped his hands behind his back, "You will serve the Emperor no differently than before New Casten and yet you will be awarded the respect and honour due to someone placed in the position you are about to receive."
Briggs sat up and straightened his shoulders, "Ok, I'll do this. To leave this place and serve the Emperor yet again will bring me joy. To do so while leading brother marines into combat again, all the better."
Galen gestured towards the door, "Then come with me, your a far cry from wearing the proper trappings of one in your position, Master Briggs."
Briggs walked out of the cell with Galen. As he crossed the threshold he turned, looking at the inside of the cell, before closing the door.
By Unknown