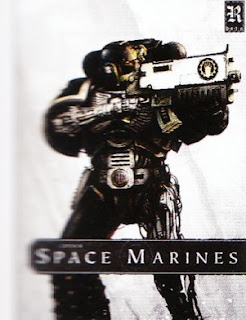 It's time for another early look inside the Space Marine Codex!

Some of you may remember Part 1, if not I suggest taking a look so you can see the rules on the Chapter Tactics and Special Characters.

All caught up now? Good. Now we can start!

Once again special thanks goes to 40k Radio for their efforts to share this all with us. Once again I'll using comparative costing for points (in other words any comparisons are made to the points values given in the 5th Edition codex), just to keep things nice and simple. So with that in mind, let's get started!

To keep things simple we're going to focus only on the changes here. If it isn't mentioned it was either not covered by 40k Radio or wasn't changed.

Armor of Indomitus: 2+, 6++, Relentless Same cost as a Landspeeder with a Multi-melta
Once per game during any phase the wearer may choose to temporarily push the forcefield to its limits. For the duration of that phase the Armor Indomitus has a 2++ Invunerable Save.

Standard of the Emperor Ascendant: Same cost as Landspeeder Stom with Multi-melta
Friendly units n 12" with the same Chapter Tactics as the bearer re-roll morale checks and pinning tests. Additionally, friendly units chosen from Codex: Space Marines within 6" of the bearer have the Hatred special rule, and add +1 to their total when determining their assault rolls. Furthermore, the bearer and his unit have the Fear special rule.

Graviton Weapons
From FW:
"We plan to review all of the Badab Chacaters once the Space Marine Codex has been released. However, we don't have a specific time frame for this so please accept our apologies. "

So there we are folks, a lot more rumors to go with the ones we've already got. I don't know about you but I'm excited. Plus I think the Hunter and Stalker tanks look better than people were expecting considering neither have Interceptor or firing modes that let them not shoot as if they're Skyfiring.

Speaking of Skyfire, I just want to remind people that Skyfire works on Skimmers too. So those Eldar tanks you don't like, or the Necron skimmers that never want to go down can be shot at using your full ballistic skill with those new tanks.

Well that's all for now. I'll keep you posted if anything else comes out, but failing that it looks like what's up next is Tyranids, so we'll be diving into that real soon. So stayed tune for more rumors, because I'll keep serving them piping hot!