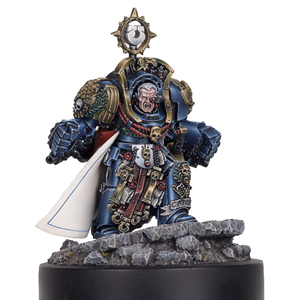 So a lot of rumors are flying around, and almost as many pictures, so why don't we make this a little easier to slog through shall we? To keep this simple all rumors that also feature pictures will have the pictures below the rumor they're related too, and I'll be dividing Force Org Slots into two sections: new units/models and new rules. All the rumors we've been able to confirm will have it annotated next to the rumor. Some sections will be blank, and I'll be maintaining this as a template with weekly updates of all the information, so as new things are updated and confirmed they'll be added and annotated.

General Information
176 Pages
Cover features Sicarius
Less Ultramarine-centric (which gives more chapters the spotlight and then allowing for a proper expansion on the Ultramarines in a supplement)
7 different Limited Editions, priced at $115 USD (regular edition is rumored to be $58 USD)
Black Templars moved back into the codex. Confirmed by multiple sources
Black Templars get special mention in the White Dwarf by Robin Cruddace on why they were moved, and are the Battle Report army vs CSM/Daemons Confirmed by multiple sources
Black Templars are featured as one of the Limited Edition books:

New Codex Rules
New codex focus is on synergies between units
Grav Weapons being introduced (wound vs armor save)
Combat Tactics for the following Chapters: Ultramarines, White Scars, Imperial Fist, Salamanders, Iron Hands, and Raven Guard. They have two special rules per choice.
Black Templars are in the codex. They have some restrictions on certain options they can and can not take, but they do have access to both Centurions and Thunderfire Cannons (other options haven't been reported yet). They retain the Crusade Squads as a unique chapter choice as well as the Emperor's Champion, and have unique chapter Tactics.

Rules:
Generic characters will be able to purchase alternate Combat Tactics options to represent a wider range of Chapters/companies.
Special characters will still exist, but will not be required to run a specific chapter or company anymore.

Rules:
Dreadnoughts give bonuses to nearby units due to their "Inspiring Presence"
Vanguard Veterans moved to Elites
Legion of the Damned have "flaming projectiles" and ignore cover.

Rules:
Graviton Weapons roll to wound vs armor
Graviton Gun is rumored to be a Special Weapon choice

Rules:
Rhino variants: Command, Medic and Armored Recovery, all of those are purchasable upgrades and give their squad a bonus.

Rules:
Assault Centurions have Siege Drills (which are S9 melee weapons) and come equipped with twin-linked flamers and Ironclad assault launchers. They can upgrade the Flamers to Meltas and the Assault Launcher can be upgraded to Hurricane Bolters. They also have the following Special Rules: Slow and Purposeful, Decimator Protocols (Can fire up to two weapons in each shooting phase), Very Bulky, Chapter Tactics, and ATSKNF. They can purchase an Omniscope which gives the Night Fight and Split Fire special rules. They can purchase a Land Raider as a dedicated transport. Lastly they have a 2+ save, no Invulnerable save and their Strength and Toughness is 5.

Rules:
Devastator Centurion come equipped with twin-linked Heavy Bolters and Hurricane Bolters. Hurricane Bolters can be upgraded to Missiles and the Heavy Bolters upgraded to Twin-Lascannon or Grav-cannon and grav-amp. They also have the following Special Rules: Slow and Purposeful, Decimator Protocols (Can fire up to two weapons in each shooting phase), Very Bulky, Chapter Tactics, and ATSKNF. They can purchase an Omniscope which gives the Night Fight and Split Fire special rules. They can purchase a Land Raider as a dedicated transport. They can be purchased in squads up to 6. Lastly they have a 2+ save, no Invulnerable save and their Strength and Toughness is 5.

Lore
Centurions: A fairly recent adoption by the Space Marines, these suits are only 5,000 years old and are primarily used for line breaking. They are not piloted by Veterans, but rather by Assault Marines and Devastators instead.

I'll see you next week with more developments!
By Zion