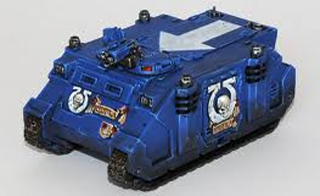 When I was asked to join the Talk Wargaming team I had a few ideas but what could I contribute regularly?

I've been at this for a little over fifteen years. I've played five editions of Warhammer 40,000, and I am currently in the process of opening a game store which will have a Games Workshop account-- so it's about to become part of my livelihood. I've won an honorable mention at Golden Daemon (which I very seriously doubt I could do nowadays!), I've taught dozens of people both the hobby and the game. I've won tournaments, and I've been a community leader. Out of everything I know with the hobby though, there's nothing I know better than the Adeptus Astartes.

So, with that in mind, it seemed natural that a regular contribution from me should be making the most of your Space Marines, regardless of whether they're loyal to the God-Emperor or the ruinous powers. Look not to these articles for army composition, or how to build that "killer combo" netlist. You don't need an article to tell you how to win with something that takes advantage of game mechanics. But if you're after real tactics that apply on the most basic level, regardless of your army composition or what your opponent has brought to bear, you will find this series infinitely useful.


I spent some time debating what would be a useful inaugural article. After consideration, I settled on the deployment and application of Rhino APCs—they are perhaps the most utilitarian part of a Space Marine army, and can be used in dozens of functions to ensure your Space Marines are able to do the job you need them to do. 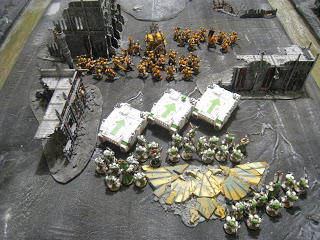 In this image, we have roughly equal armies opposing one another. The Space Marine player has deployed his Rhinos in an echelon formation, so that line of sight is as completely blocked to the Tactical Squads as possible. While this does expose the Rhinos to anti-tank firepower, the bulk of enemy shooting cannot target the Space Marines, ensuring that the Space Marines have the maximum number of models available to shoot back in the following Shooting Phase. This formation is particularly useful if your Tactical Squads cannot be moved into cover in a given turn, or must cross a large area of open ground to reach their objectives.

In the Chaos Space Marine player’s turn, when presented with the echelon of cover-providing Rhinos, there are three options. The first is to attempt to move around the Rhinos to engage the Space Marines more directly. This is not always possible due to terrain—using Rhinos to create cover as in Figure 1 is particularly effective when you can use terrain to force the way your opponent moves. If they cannot move around the Rhinos and still effectively engage their opponents, then you have control over the flow of the battle at that moment—a huge advantage.

The second option is to attempt to shoot the Rhinos in hope of removing them from the line of advance—this is usually what will happen when you deploy your Rhinos in this way. Rhinos are inexpensive, and in the worst case scenario, the vehicle explodes. This leaves behind a crater, which will make any assault against the Space Marines much more difficult—essentially, even in death, the Rhino still aids the defense of the Space Marine player. If the vehicle is simply immobilized or wrecked, it continues to serve the function you put it there for, and your opponent’s shooting has essentially been wasted.
The third option for the Chaos Space Marine player is to simply assault the Rhinos. This runs into the same issues as shooting the Rhinos—namely, there is no meaningful disadvantage to losing the Rhinos for the Space Marine player. 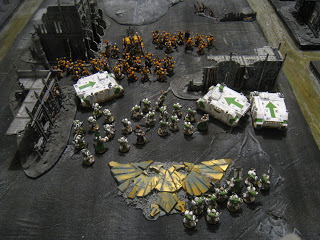 The above image assumes that the Rhinos have survived the Chaos Space Marine shooting and/or assault phases—which is a large assumption. If even one of them survives, it can be moved to continue to block line of sight and forcing your opponent to move around or otherwise deal with the tank instead of your infinitely more valuable Tactical Squads. Exploded Rhinos no longer block line of sight—otherwise, the tanks can simply be moved to the side, so your Tactical Squads can focus their fire on a single enemy target and eliminate it while minimizing their exposure to return fire, or can cover the ground to deliver an assault as needed. 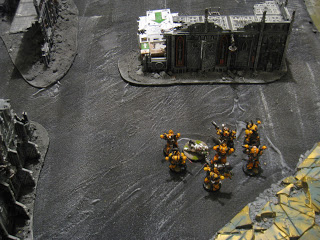 Rhinos are classically considered to exist purely for delivering a squad of Space Marines into battle. In this edition, that role has taken a back seat to the Rhino providing an effective shield for the squad it is bought for. Let’s look at positioning a Rhino for eliminating a threat, for the sake of argument.

In the above image, The Pyre is holding an objective. The Space Marine player has moved the Rhino so that it is in cover from The Pyre shooting. The Rhino might have been able to move further into the breach, but it’s better to be as much as six inches further away from the target and be in cover than be exposed to your target. Whether or not the vehicle is destroyed at this point is actually irrelevant—the squad is in position. But it’s generally good practice to ensure that your units, including the Rhino, have the best survivability you can give them based on their position—the Rhino’s utility won’t be wasted later if it survives. The Rhino simply makes the Space Marines within proof against small arms fire for the turn at the moment, though. If they are forced to disembark due to the vehicle being wrecked or otherwise destroyed, they can deploy as show in Figure 4, without the Rhino providing cover. 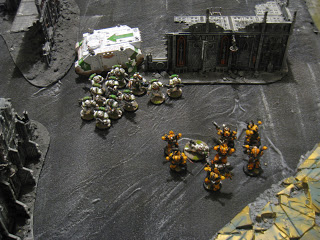 In the ensuing Space Marine turn, the squad deploys before the Rhino moves. While it can’t charge this turn, the Rhino can be used to screen the squad from one direction from enemy return fire—it’s essentially what you see in the first image, on a smaller scale. The Tactical Squad can now shoot The Pyre—a numerically inferior opponent at this point—and take the objective.

The Chaos Space Marine player at this point either will lose the objective over the duration of a close-range firefight and/or close combat, or will have to commit more units to holding that objective—because of the Rhino’s position, it may not be possible to bring the necessary firepower against the Space Marines in the ensuing phase. The Rhino should move to wherever line of sight is best blocked—after it delivers its payload, the Rhino should be placed so that it physically ensures nothing interferes with the squad meeting its objective.

As a side note, this is shown using only a single squad. Assaulting a point in this manner is significantly more effective when two or more units can converge on the point—the name of the game is to apply overwhelming force and use the Rhinos to prevent your opponent from removing your ability to apply that force. 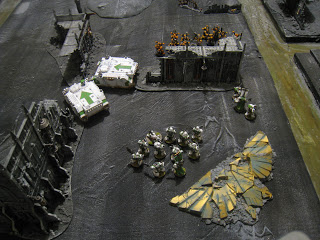 Now, let’s look at a couple end-game scenarios. Maneuvers using the Rhino ensure the Space Marines have the maximum potential to seize their objectives. 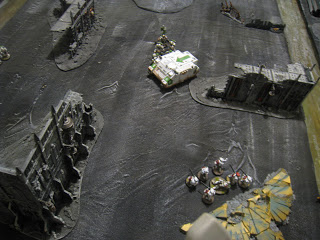 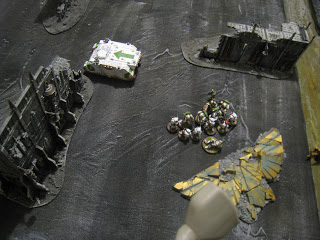 In this instance, a depleted unit of Fire Warriors holds the objective that will decide the game. The depleted Tactical Squad take shelter behind the Rhino to ensure that they do not lose any additional models to the Fire Warriors’ impressive shooting. The Fire Warriors may choose to shoot the Rhino in this case, which is fine—they may wreck it, but it will not impede the movement of the Space Marines enough to stop them from reliably delivering a charge in their subsequent turn. Should the Rhino survive, so much the better—it can simply move to one side to allow the Space Marines to charge, and it can even lend its firepower to sweeping the objective clear here. 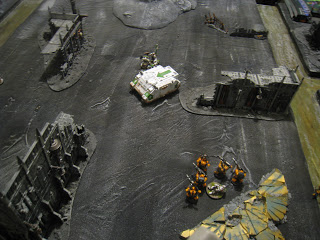 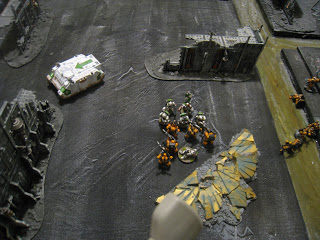 Even against a foe that is likely to completely destroy the Rhino, as shown above, the end result is the same—forfeiting the Rhino in this case ensures that the Space Marines are not targeted with weapons which will kill them on rolls of a 2+, but also ensures that they are able to assault the position. 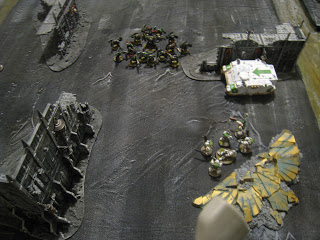 Now, let’s look at the opposite scenario. The Lions Rampant are defending the objective in this image, which will ensure an Imperial victory. However, a large squad of Orks is bearing down on them, and are only 14’’ away—enough to deliver a decisive assault in their subsequent turn, even if the Space Marines kill several with bolter fire. 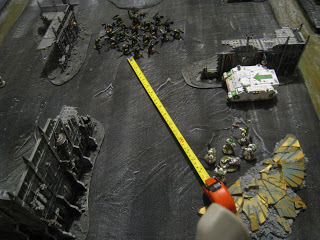 By moving the Rhino from the position it is at, the Orks can no longer make a reliable charge in their turn. They must stay an inch away from the vehicle, forcing them to move in a way so that they are ultimately no closer to the Tactical Squad at the end of their movement than when they began: 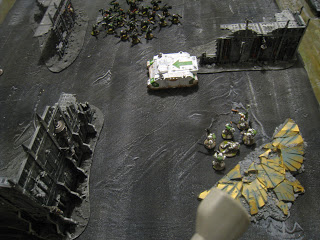 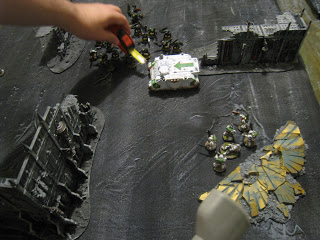 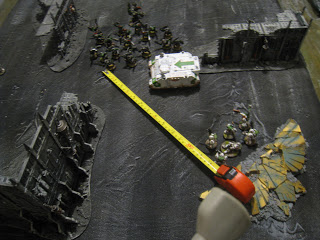 This stops the Tactical Squad from firing at the Orks, as their line of sight is blocked—but the objective is secure, and that is more important than killing a few greenskins. The tape measure shows that the Orks are, at their closest, 13’’ away from the Tactical Squad.

Hopefully, this has given you, the reader, some ideas for using Rhinos effectively to make sure your troops get to where they need to be and stay safe from reprisal. These maneuvers are reliable and effective, proven over many years of gaming. While these have been demonstrated in small scales, and require an awareness of the entire table to work effectively in a game, understanding the basic premise of how to deploy and protect units using Rhinos is often enough to begin the development of a superior Space Marine player. Give it a try next time you play your power-armored heroes!


A massive thanks to The Son of Horus for the most in depth Rhino guide I've ever seen! He'll be joining our team permanently for his next guide - Lee
By Unknown