Having just had my first trip to Warhammer World the other day I thought I'd share the first of two Battle Reports with you.

So before we had a massive 2 v 2 on a themed board we thought that we'd have a warmup 1 v 1 at low points. My opponent was my friend Dean who was playing his Infantry heavy Guard list sporting 2 squads of Plas Vets, a Command Squad in a Chimera, and a large Platoon of Infantry using Las Cannons, Auto Cannons and a Heavy Bolter with Creed as HQ. I was going for a Mech themed Space Wolves list with a Drop Pod to run disruption, 3 packs of Grey Hunters, 1 pack of Long Fangs with Heavy Bolters, a Rune Priest and some Snipers. The mission was a simple King of The Hill, fighting over a Chaos Shrine in the middle (this game wasn't exactly story driven...) with Secondary Objectives as per the Rule Book in play. 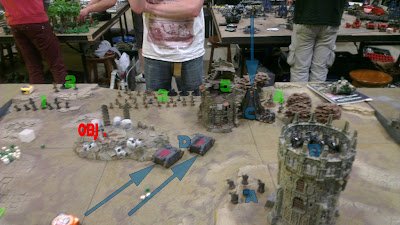 Turn 1 saw the Wolves going first, the Drop Pod thundered into the ground leaving the surrounding Guardsmen reeling from the impact. The doors blew open and out came Hektor Grimm's Grey Hunter pack (C), they opened fire with their two Plasma Guns against the Plas Vets hiding behind the enemy tower (5) but thanks to their Carapace armour only 3 vets fell to the onslaught! The squad of Guardsmen in the woods (4) rushed to meet the Wolves Drop Pod but all but 2 were cut down by the Heavy Bolters of Viktor Surestrikes Long Fangs pack and the Sniper Rifles and Heavy Bolter of Skar Deadeyes scouts (B &amp; A). Under the fusilade of fire the remaining 2 packs of Grey Hunters speed forward into their Rhinos to secure the bottom of the stairs leading to the objective and pop smoke.

In return the Imperial Guard unleashed hell, the Plas Vets and remaining 2 Guardsmen (4 &amp; 5) destroyed Hektor Grimm and his pack (C), a searing bolt lances out from the squad of Lascannons from the main Platoon and cracks open one of the Rhinos but merely shakes the other. Hrud Wyrmheart (my Runepriest and Warlord) disembarks the stricken Rhino with a pack of Grey Hunters in tow only to have two of their number cut down by enemy Las fire. The Plasma Vets (1) begin to advance onto the flank towards the stricken Rhinos. 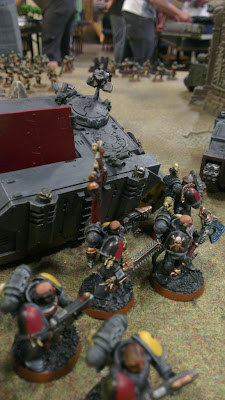 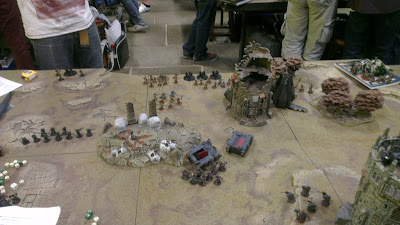 Reeling from the vicious fire thrown at them from the massed ranks of the Guard the Grey Hunters from the second Rhino disembark and charge headlong to meet the advancing Guardsmen hoping to seize the objective in close combat. Recovering from their wrecked Rhino the Rune Priest and his pack move left to intercept the flanking veterans and manage to bring down two of them from a few lucky bolter shots. At the same time cracks ring out overhead as the Long Fangs Heavy Bolters shower the surviving Guardsmen in the forest with mass reactive bolts, blasting them to a pulp and causing the remaining survivor to flee off of the board. The Snipers fire into the Veterans tucked behind the tower and cleanly take out two before the disembarked Grey Hunters smash into close combat with the approaching Guard squad and annihilates them in one round of combat in a flurry of extreme violence taking no casualties in return, however they are now in the open facing the remainder of the Platoon and it's heavy weapons... and it's the Guards turn.

The main Guard Platoon, horrified by the butchery they had just witnessed, steeled themselves, advanced forward into rapid fire range and opened fire on the bloodied Wolves. Lascannons, an auto cannon, plasma fire and mass rapid fire las weapons tears the entire pack of Grey Hunters to pieces. This would end up being the decisive action for this game. I was foolish, determined to seize the initiative and push my opponents central advance back I lost the second of 3 Grey Hunter packs leaving just one more on the board with the Rune Priest. Dean being the excellent Guard commander he is knew that sacrificing one small squad in this way would allow him to lure me into range of his weapons - and boy did I fall for it. The Veterans on the flank manage to land 5 hits from their Plasma weapons onto my Rune Priest and the Grey Hunters with him before the Master of Ordinance lands a perfect shot finishing off the Rune Priest and the remainder of the pack - I now have no troops left, all I can hope is to keep him off of the objective and aim for a draw with my Drop Pod still in his Deployment Zone. 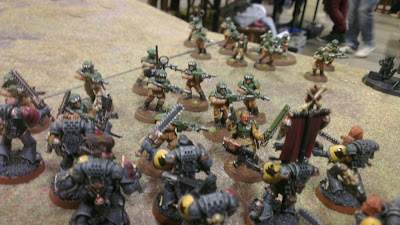 (Grey Hunters disembark their shaken Rhino and advance into Close Combat with the Guard... this would prove to be their undoing) 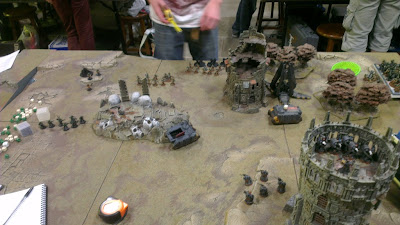 With the Platoon Command squad out in the open the Snipers open fire on them as they come around the side of my opponents tower and kill all of them with an excellent round of shooting. With nothing else in range at this point my Long Fangs continue to observe their arcs waiting for the first Guardsman to come in range so they can unleash hell. My remaining Rhino, free of it's shaken/stunned result moves behind the enemy tower and trains it's storm bolter on the steps leading to the objective.

The Guard step over the bodies of their fallen Command Squad and advance everything they have towards the objective knowing the Wolves don't have enough shots to kill them all, the Lascannons kill two of my Snipers whilst the Master of Ordnance kills another two, the remaining scout flees from the board with his Heavy Bolter exhausted of ammunition. 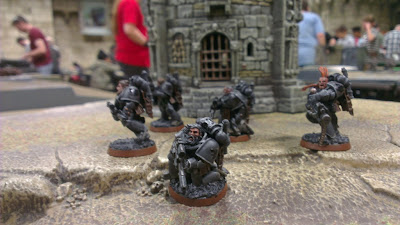 (Skar Deadeye and his pack of Scouts engage the Guard Command Squad with lethal accuracy, slaying them all before being killed in return)

Turns 4, 5 & 6
The Wolves having nothing but the pack of Long Fangs on the tower continue to beat down fire onto the advancing Guardsmen, killing one entire squad as it advances up the steps to the objective and finishing off the advancing Plas Vet squad on the flank, the Drop Pod with it's Machine Spirit in-tact engages the Lascannons on the back of the board, eventually killing 2 of the Lascannon teams but by now a victory is looking hopeless, the least I can hope for is to make the cost in blood as high as possible.


The Guard continue their advance, despite having one squad destroyed through Heavy Bolter fire, a second manages to squeeze past and go to ground on the objective. Snipers in the Command Chimera eventually manage to destroy the Wolves Drop Pod with a Rending shot and the Master Of Ordinance fails to hit the Long Fangs in the tower, however a well aimed Lascannon shot disintegrates the top half of one of them in the tower. Finally one of the Guardsmens Autocannons manages to bring down the remaining Rhino that had been harassing them with it's Storm Bolter. 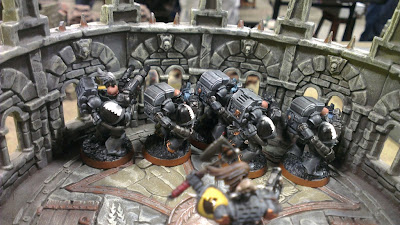 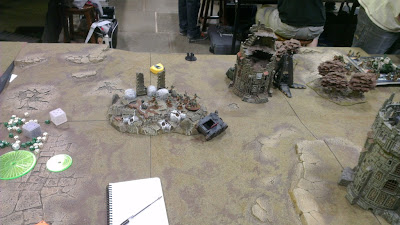 So with the Guard holding the objective, the Guard having slain my Warlord, and the Guard having got first blood it was a huge defeat for me. The turning point was really when I committed that fresh strong pack of Grey Hunters into a Melee that left me in the open - I should have just dived onto the objective and gone to ground hoping to ride out a few turns of shooting. That said however crushing a defeat it was I hugely enjoyed this game, interesting (albeit fantasy) terrain, I killed lots, and I tried out things I never had before (Heavy Bolter Long Fangs and Scout Snipers - both of which proved to be my best units in the end). My opponent played excellently, playing to the strength of the Guard which is warm bodies and lots of them!

I hope you enjoyed reading this as much as I did playing it!